What are cell culture plates? 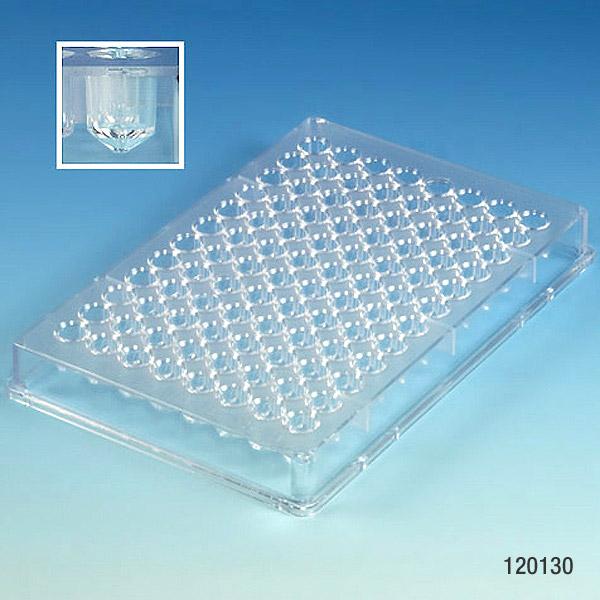 Cell culture plates are used in laboratories to provide optimum conditions for cell culture. A cell culture plate provides the right conditions for the growth of cell cultures. They are usually transparent to allow visual assaying, and the dishes can be either V-shaped, flat, or round at the bottom. They often have lids to protect the samples which might be placed in multiple wells for storage, experimentation, and screening.

While not all cell types require cell culture plating and can grow well in a liquid suspension, others called adherent cells need a surface onto which to latch. Most cells that have been sampled from solid tissues are adherent, so require a cell culture plate for growth and observation.

Cell culture plates are often coated with an extracellular matrix such as laminin, collagen, fibrin, or modern synthetic hydrogels such as polyacrylamide or PEG, to allow for better cell adhesion as well as differentiation and growth.

Cell culture is a technique during which cells are taken from an organism and placed in a fluid medium under properly controlled conditions. If conditions are ideal, the cells can live and even grow. This growth takes the form of mitosis (cell division) or other processes like differentiation when cells transform into particular types that have functional capabilities similar to organs or tissues in the original whole organism.

Depending on the type of cell that is grown, to culture cells, a growing medium is required. This medium is kept in a specific type of vessel to supply the cells with various essential nutrients. These can include carbohydrates, vitamins, minerals, amino acids, growth factors, hormones, and gases such as carbon dioxide and oxygen.

The medium also acts to regulate the physiochemical environment, including temperature, osmotic pressure, and pH regulator/buffer. Most cells require a substrate on which to grow, whereas some can grow floating freely in a culture medium. Nowadays, ‘cell culture’ usually refers to the culturing of cells from multicellular eukaryotes, particularly animal cells.

The cells of eukaryotes have a nucleus enclosed in a membrane. Other types of culture that also involve the growing of cells include fungal culture, microbiological culture, viral culture, and tissue culture.

The history of cell culture

Cell culture, tissue culture, and organ culture originated in 1907 in a laboratory at Yale University. Ross Harrison removed the nerves from a frog and was able to maintain them alive in a salt solution for a few days. A few years later, a visiting scientist reported on the first cell cultures derived from an insect. For the next 50 years, insect cell culture was used in experiments, for example, virus pathogenesis. Then Australian Thomas D. C. Grace managed to obtain four cell lines from a particular moth that were able to grow continuously, provided there was occasional subculturing.

The advantages of cell culture

If we didn’t have cell culture, we would find many types of in vivo research impossible. It allows us to ascertain the effects of toxins and drugs on the cells of a complex organ, for example, and can reveal how the cells metabolize these substances. With cell culture, the scientists can control many factors such as growth rate, culture conditions, culture medium, and population density. The genes of these cells can be investigated for their role in malignancy and physiology of the cells.

Let us say that someone has cancer. A sample of their tumor can be taken, and the cells cultured to find out which cytotoxic agent can kill these cells. This allows for the patient to then be treated safely with the identified drug. Another practical example is a patient receiving chemotherapy or heavy radiation for the lymphatic disease. He or she could have their stem cells and healthy lymphocytes grown for reintroduction after treatment.

There are a wide number of applications for cell culture. For example, the mass culture of animal cells is essential to the production of viral vaccines and other biotechnological products. The culture of human stem cells allows for differentiation of the cells into the different somatic cell types so that they can be used in transplants. Stem cell culture also allows for various substances released by stem cells to be used for therapeutic purposes.