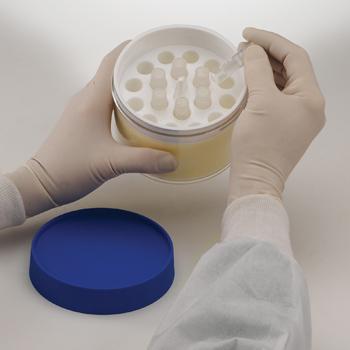 One of our popular products here at Next Day is the Cryo-Safe™ freeze controller from Bel Art. It’s a well-engineered piece of equipment. It absolutely assures a drop in cell temperature of 1°C per minute, and a lot of labs want that, at high precision.

But where does that 1°C gradient rule come from? And is it right for every possible application?

It’s a fair question, and not every person in every lab is always clear about this. So here’s an answer, first in the form of a review of the general challenges in cryopreservation, and then a bit of discussion about cooling rates, and how they’re derived.

How to think about cryo

Broadly speaking, the idea behind cryopreservation is to lower the temperature of living cells to preserve them structurally intact, and therefore functional. Doing this recklessly destroys cells.

The basic peril of reckless cooling is the freezing of water, which typically constitutes at least 80% of tissue mass. Do this, and solutes in the cells concentrate. And that, according to one theory of freezing-damage, can ruin a cell. Another danger, goes a rival theory, is that ice crystals that form are capable of physically disrupting parts of the cell. It’s likely that both these mechanisms are involved, and not just in freezing, but in thawing as well.

A way around this is to add cryoprotectants. These are supposed to increase solute concentrations in the whole system, and mitigate ice formation. The trick is to get them to penetrate the cells completely, and at the same time not be cytotoxic. Glycerol works pretty well for this, and so do propanediol, ethanediol, and dimethyl sulfoxide.

It’s probably fair to say that freezing inside the cell is more destructive than freezing outside the cell. If this is the case, safe cooling rates ought to be calculable as a function of water permeability of the plasma membrane of the particular cells involved. The critical dynamic would be that if water flow is faster than thermal flow, there shouldn’t be any intracellular crystallization. Or, if thermal flow is the same as water flow, then the cell would risk crystallization during that osmotic exit of water.

The problem is that cells often come to your lab packed together, as tissue. There’s a whole extracellular structure to worry about.

There’s a way around this, too, and that is ‘vitrification’. This is when you get tissue to reach a level of viscosity that’s high enough to behave rather like a solid, but not high enough to risk any crystallization. It looks glassy, and vitrum means ‘glass’ in Latin, which is where the term comes from. Vitrification is the general alternative to conventional cryopreservation. It isn’t a perfect replacement, because it still risks cytotoxicity. You still have to use a cryoprotectant. And even in vitrification, sometimes, you still have to be careful of how solute equilibria can change across membranes and between cell compartments during the process. It can be quite fiddly to manage diffusion and osmotic pressure back and forth while trying to manage cryoprotectants. This goes during thawing, too – not just freezing.

Not all cells are the same, either. Because of this, and because cryopreservation and vitrification are extremely difficult to get right by themselves, the existing lab protocols (and there are some) are, by industry consensus, probably sub-optimal.

Optimal cooling rate depends on what you’re trying to preserve

Things really get variable when we start to talk about cells that don’t come from people or other animals. There’s been quite a lot of work on cell viability in other models. This may be of interest to your lab. It turns out that cell permeability, which is to say, resistance to water transfer, is only one factor in trying to anticipate cell death in freezing. Another is cell size, or more particularly, surface-to-volume ratio. This defines the transfer surface for heat change, so that’s reasonable to expect. Heat (and also water) flow out of big cells faster than from small cells. Small cells are hardier in cryo, probably for this reason. The other factor, and this is not of use to every lab, is the presence or absence of a cell wall. This is because walls protect cells, pretty simply.

Cooling rates are critical, then … but for more reasons than one. Some bacteria tolerate a wide range of cooling rates (between 15 degrees and 40,000 degrees per minute, in the case of C. utilis), some plant cells cells, like yeast, can tolerate similar ranges, but have intolerance zones within them, and large human cells, like the K562 leukemia cell, are so extremely fragile that it’s difficult not to kill them.

The 1°C rule? It’s actually not right for every kind of cell. It’s too slow for mammalian red cells, for example, and it may be too fast for large masses of cells and for organs. However, the rule isn’t there for no reason.

What is that reason? Cooling velocities around a degree a minute actually do turn out to be optimal for a great many cells, and probably most cells that most labs are likely to see. One degree every minute is fast enough to minimize injury from solute concentration and dehydration, and it’s slow enough to minimize the chance of intracellular freezing.

So it’s very likely that this is the very cooling rate your lab needs. If it is, we’re pleased to say that you’ll absolutely have it with the Cryo-Safe.™