https://www.nextdayscience.com/
Home » Blog » A Guide To Centrifuges and Microcentrifuges

A Guide To Centrifuges and Microcentrifuges 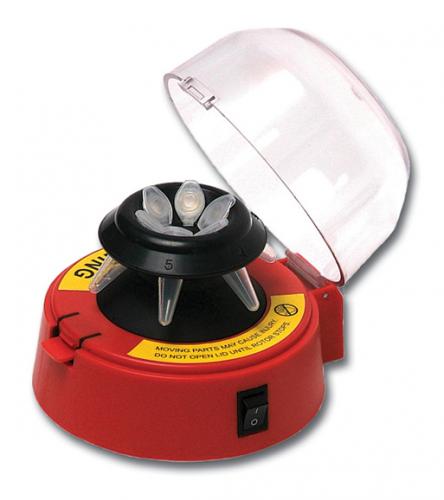 A critical piece of laboratory equipment, a laboratory centrifuge is a motor-driven device that spins liquid samples at very fast speeds around a central point. The concept behind the centrifuge is that it relies on the sedimentation principle. By spinning so quickly and forcing substances inward, which is called centripetal acceleration, the substances of greater and lesser density will separate, causing sedimentation to occur. This separation allows for isolation, study, and research of specific substances. A mini-centrifuge, also called a microcentrifuge, works in the same way, but is capable of working with much smaller samples, using micro-tubes that range in size from 0.2 ml to 2.0 ml. Its compact design and smaller footprint makes it convenient to use on the workbench, while also economizing on workspace.

Is it centripetal or centrifugal force?

How powerful can centripetal force be? Pretty strong. Whenever anything is moving in a circle, the velocity is constantly adjusting because of the constant change in direction. With that change in velocity, there is acceleration, and the force that causes that acceleration can get pretty big, based on the laws of motion. Basically, the bigger the mass of an object, the more force is needed to make it go in a circle. The equation used to calculate this force is F = (mv2)/r. F is the force, m is the mass of the object, v is the velocity, and r is the radius of the circular. Therefore, centrifuge equipment can get quite large, but the basic laboratory centrifuge doesn’t require as much force as a NASA-style centrifuge that whirls astronauts around, and a mini-centrifuge requires even less.

To run a centrifuge safely, checking the rotor and lid-locking mechanisms accurately is a must. Because of the very large force that occurs during high velocity rotation, a rotor failure can completely ruin the centrifuge equipment. Never touch a centrifuge rotor while it’s in motion because a spinning rotor is quite dangerous. The most up-to-date centrifuges have protection from this accidental contact by securing the main lid. If the safety shield is inadequate, the centrifuge can be propelled from its position and cause significant damage to the lab and injury to personnel.

It’s critical to carefully balance a load in a laboratory centrifuge. To accomplish this, you need to have a combination of samples and balance tubes that all have the same weight or to use balance patterns that balance the load. Even a tiny difference in the overall mass of a centrifuge load can cause a very large force imbalance when the rotor is running at a fast speed. That imbalance can damage the centrifuge or cause personal injury. There are centrifuges manufactured that will automatically detect the imbalance and stop running until the balance is corrected.

Regardless of safety measures in place, it’s important to use best safety practices when operating a centrifuge. Be sure to practice regular maintenance and proper use procedures and buy only the highest quality centrifuges and mini-centrifuges.

Visit the Next Day Science web site for high quality and affordable centrifuges and mini-centrifuges.